Should You Run Ceiling Fans With Air Conditioner? Solved!

Ceiling fans are one of the most effective fans to use in your home. This is mainly because of how well they circulate air in a home, creating a draft throughout. On hot summer days, a ceiling fan can help circulate cool air around a room by moving large volumes of air.

Air conditioners help to cool a home by dehumidifying the air, thus removing excess heat and pumping in cool air. While a ceiling fan and air conditioner can help down a room, should you run them together for better results?

Should you Run Ceiling Fan With Air Conditioner?

Yes, you can run your ceiling fan and air conditioner simultaneously. However, running a ceiling fan does not mean it cools down a room. Instead, a ceiling fan increases your body’s evaporation rate as it pushes air. The increased evaporation makes it easier to lose heat, making you feel cooler.

Ceiling fans are also great at redistributing conditioned air throughout your home. Power then on when you’re home and let the blades rotate at the lowest setting to help move air. This will help the air conditioner reduce its energy consumption because it does not work longer to cool every zone.

According to the department of energy, Ceiling fans can also help you raise the thermostat setting by about four degrees without affecting your comfort. This saves you money, and you do not compromise your comfort level. However, when you’re not at home, turn off the ceiling fan to save on energy.

Apart from plugging in a ceiling fan and letting it run, the Ceiling fan direction affects how effective it cools down a room.

The ceiling fan should run counterclockwise when it’s hot in the summer, and the air conditioning is on. This is also known as the forward direction, and it helps drive air down the room to cool you down. 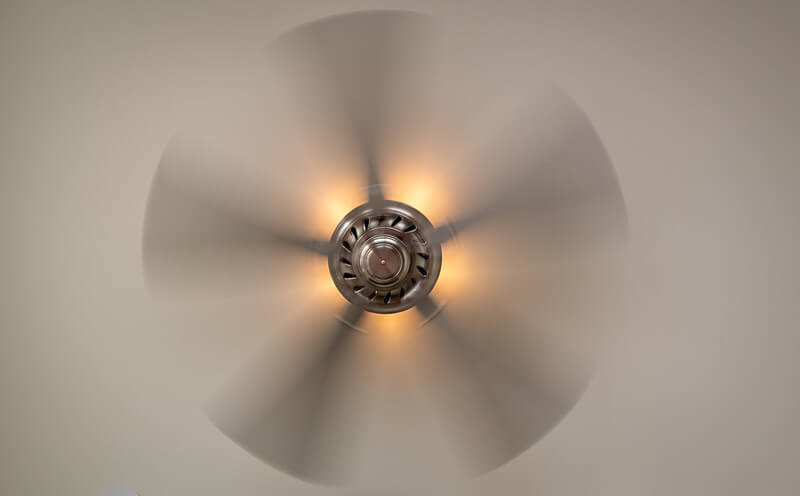 When it’s cold outside in the winter, you should change the fan’s direction to clockwise or reverse. This draws cool air upwards, displacing the pool of hot air that collects at ceiling level into the room.

To change the direction, most ceiling fans come with a switch. However, you can also get a modern ceiling fan with a remote to control some of its functions, such as speed and direction.

Here at Cozy Indoor we write about the world of home heating, cooling, and air quality. If you're looking for anything that works, we've got your back. Here you can read about everything from air conditioners, humidifiers, air purifiers, and much more. Enjoy.