Air purifiers, sometimes called air cleaners, help clean the air in our homes by removing dust, dander, pollen, odors, and other irritants. Air purifiers use several different technologies to tackle indoor air pollution. While most of these technologies work, some might harm your health.

In this post, I’ll cover the different popular air purifiers so you can make an informed decision while shopping for one. Enjoy.

HEPA, short for High-Efficiency Particulate Air, is one of the most common types of air purification technology. HEPA filters trace their origin back to WWII when they were developed to clean up dangerous chemicals and radioactive particles. HEPA filtrations are very useful in workplaces, homes, and factories where dust is a byproduct of the manufacturing process. 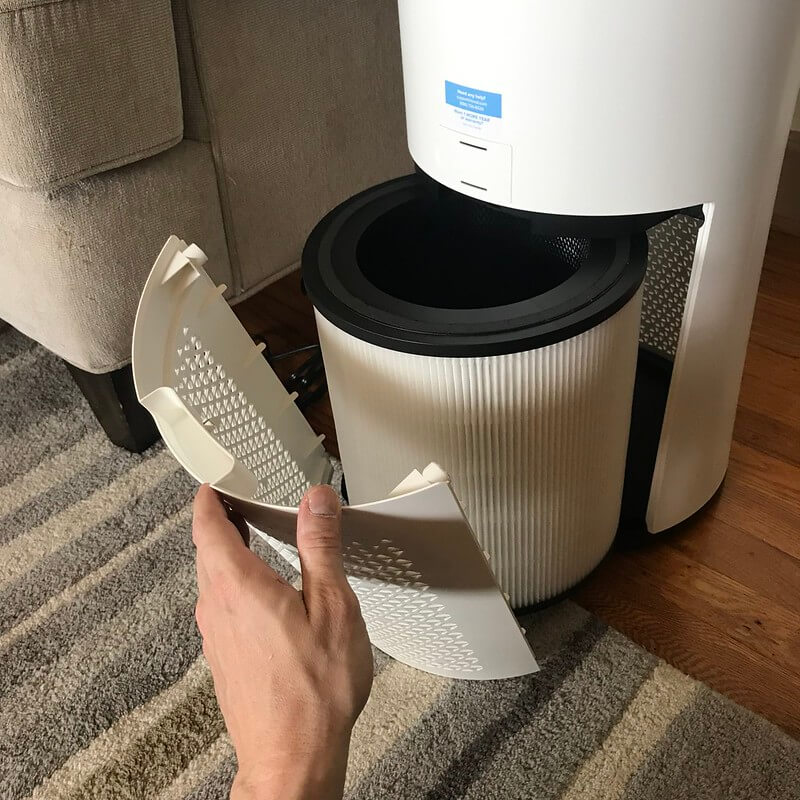 HEPA filters can be made of borosilicate glass fibers, plastic fibers like polypropylene, or fiberglass fibers.

According to NIOSH, for an Air filter to be classified as a HEPA filter, it has to trap 99.97% of dust particles that are 0.3 microns in diameter. To put this into perspective, a typical human air size is about 50 microns. So, 0.3 microns are several over 100 times smaller. So, how does this type of filter work?

How do HEPA Air Purifiers Work?

Particles that are smaller than 1 micron, like, bacteria, will still pass through the filter. However, because they are a bit heavy, some of them will get trapped as they follow air through the air filter fiber. This is referred to as interception.

Smaller particles that could easily pass through a HEPA filter to their freedom get trapped by a process called Brownian motion. As these particles move, they collide with air molecules and move in random patterns, which causes them to stick to the fibers of the air filter.

Generally, HEPA air purifiers are used in homes to control the spread of particulate matter and both toxic and infectious agents in the air. HEPA air purifiers are best if you or a family member suffers from allergies or asthma. This is because the filter can capture mold spores, pollen, fine dust, pet dander, bacteria, and allergens.

Activated carbon is just the normal carbon that has been processed to make it very porous, thus giving it a larger surface area for adsorption. 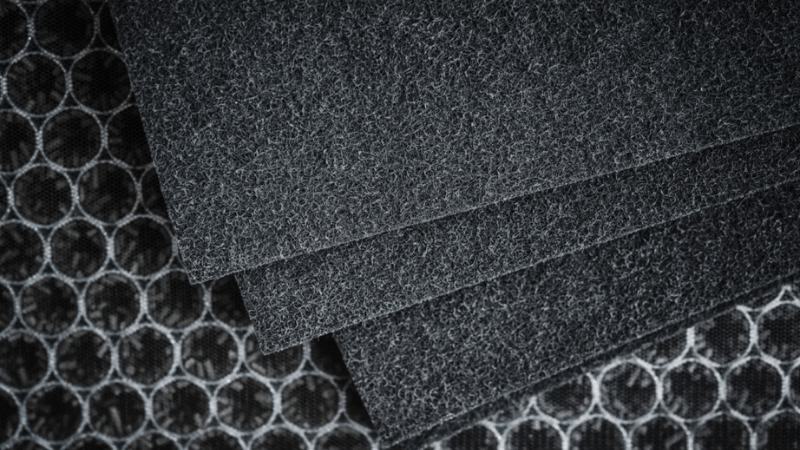 As the air gets into the air purifier and is forced via the activated carbon filters, the carbon adsorbs air pollutants, trapping them. According to a paper by the Ohio Environmental Agency (2), a single gram of activated carbon can have hundreds of square meters in surface area for adsorption.

Air purifiers with activated carbon are especially helpful for people suffering from Multiple chemical sensitivity (MCS). This is a condition attributed to exposure to low levels of known gaseous chemicals such as formaldehyde found in carpets, perfumes, and other chemicals in household cleaning products. Carbon air filters can also remove volatile Organic Compounds (VOCs) that other types of air purifiers cannot effectively filter. Some gases given off by smoking cigarettes or drying paint can also be removed.

Apart from chemicals, activated carbon air purifiers can also remove unpleasant odors created by various gaseous chemicals, though not all of them.

Ionic air purifiers, air ionizers, or ion generators are a type of air purifier technology that grew popular in the 1990s and early 2000s. Part of the reasons they became a choice for many people is because they are quiet, energy-efficient, and, best of all, do not require regularly replacing filters, which is economical.

Ionic air purifiers come in different forms. Some fanless models rely on air currents to carry the particles, while others use a fan to speed up things. Ionic air purifiers can be standalone or combined with other air purification technologies to improve their effectiveness.

How do Ionic Air Purifiers work?

Ion generators release negatively charged ions into the air for purification. The negative ions bind to charge pollutants and positively fall onto your home surfaces.

Electrostatic precipitators still employ the same idea as ion generators. However, instead of the negative ions being released into the air and settling on outside surfaces, the air purifier first pulls air using a fan. As the air passes through the air purifier, it goes through negatively and positively charged plates. The air pollutants are attracted to the plates where they can be washed off.

For this reason, electrostatic precipitators are more popular than ionizing air purifiers because you can easily clean the plates compared to the whole room.

Ionic air purifiers can only remove particulate pollutants in the air. This includes the likes of dust, mold spores, pollen, or pet dander. Compared to other models that use HEPA filters to eliminate particulate matter, it is better to use a HEPA air purifier for better efficiency.

Ionizers do not remove gaseous pollutants, odors, or VOCs from the air. On the flipside, ionic air purifiers release Ozone gas as a byproduct, which can harm your lungs. Ozone also reacts with other household pollutants to form gases like formaldehyde.

If you choose an ionic air purifier, go with electrostatic precipitators. Ensure you clean the plates regularly and the area around the air purifier, preferably with a vacuum cleaner.

Ozone is a very reactive gas that is composed of three oxygen atoms. Ozone can be artificial or naturally occurring in the Earth’s upper atmosphere. Ozone in air purifiers effectively eliminates strong odors and other airborne chemicals. Similar to air fresheners, Ozone has a very fresh scent to it. The fresh scent bundled together with the ability to remove odors makes Ozone air purifiers appealing to consumers.

However, health concerns have arisen from using Ozone as an air purifying technology. According to EPA, “NO agency of the federal government has approved these devices for use in occupied spaces”.Ozone, when exhaled, can damage the lungs and cause chest pains, coughing, throat irritation, and shortness of breath.

EPA has also noted that some Ozone air purifiers manufacturers or vendors use deceptive terms like “energized oxygen” or “pure air,” which suggest a healthier kind of oxygen when things are not that way.

The state of California has banned the use of ozone air purifiers due to studies that found these machines can worsen health conditions such as asthma, which manufacturers and marketers claim they help prevent.

How does Ozone Air Purifiers work?

Ozone air purifiers, as we’ve seen, work by producing Ozone. These machines can generate Ozone either by corona discharge or ultraviolet radiation. Both of these methods split 02 to form individual oxygen atoms.

A cozy indoor, we do not recommend using ozone air purifiers in a home setting. This is because there have been studies showing their dangers to human health, and there are no approved ozone generators for homes by the US government.

However, Ozonators have been used in industrial applications for decontamination, odor treatment, and eliminating pathogens, bacteria, and other microorganisms in the air, surfaces, and water.

Ultraviolet light is a type of electromagnetic radiation produced in nature by the sun. UV light works by altering the DNA or RNA of microbes rendering them harmless. There are different forms of UV light, including UV-A (Blacklight), UV-B, and UV-C. UV-C is the form of UV light that is used for purification purposes.

Historically, UV light has been used to disinfect water and other surfaces. Ultraviolet light C or UV-C is also used in hospitals to cut the transmission of bacteria and other microbes that linger in patients’ rooms. UV-C is also referred to as Germicidal UV light.

Like most air purifiers, UV light purifiers first begin by sucking the air into the machine using a fan.

Inside the air purifier are UV lamps, which give off UV-C light. Depending on the material used for emitting the light, e.g., phosphor or quartz, the light may not be visible or blueish. Most household air purifiers use short-wave low-pressure mercury lamps to clean the air.

Factors such as the type of ultraviolet lamp used, temperature, and humidity will affect the performance.

UV air purifiers can be used to target airborne microbes and other microorganisms. They have a wide range of applications for antiviral and antibacterial purification. Most UV light air purifiers are advertised to reduce mold allergens and dust mites. The effectiveness of UV air purifiers has long been debated. The technology has also come under fire due to the production of Ozone as a byproduct of the process.

Each technology used in air purifiers can improve indoor air quality depending on the pollutant. Before making up your mind, first, consider the type of air pollutant found in your home.

There are also other new air cleaning technologies such as probiotics and photocatalytic air purifiers that we did not include in this list. Apart from the type of air purifier, the size of your room, the location of the air purifier, maintenance, and features included should also be factored in a while making your final decision.